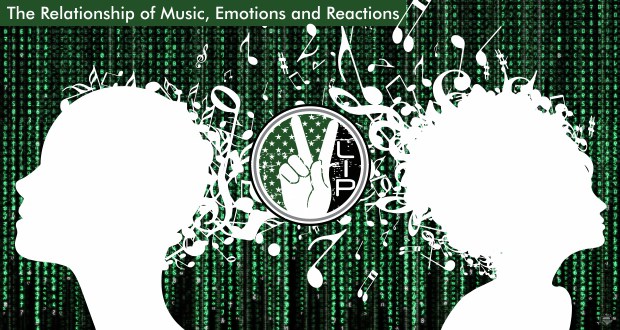 Music is a very important tool of Life, especially involving the natural emotions of the Human Race. Our interactions; both action and reaction with one another can purely be affected by the energy and vibrations that Music adds to and around our Lives.

All Music forms – Sounds have energy and vibrations that can effectively touch our brain cells, from there our brain will then send signals throughout the faculty, our body and our soul. You may hear a touching song that may send chills through your spine and literally causes you to have an elevated heart rate and goose bumps, simply because it relates to you and maybe someone that you know or knew in the past. Those emotions will cling to you for that moment, sometimes for hours or even days at a time. The fact that you can reflect back to a touching moment in time by just hearing a song-with its lyrics and melodies just pulling you in or tossing you around in your feelings; is a testament to how impactfull Music is to our Nervous System. If it can act as a Time Machine, taking you through Time and Space, then it can also take you back to a place and Time of Chaos or Peace, just by hearing it.

Being a Musician and Song Writer myself, I sincerely speak from my professional experience. Nonetheless, just being amongst people in society period, we’ve all had some type of experience with seeing how Music can change the atmosphere and affect people’s emotions around the sound system; either from a house party, to a club, a concert or even at a funeral, etc.., I’m sure that you’ve seen Music: comfort People with Hope, gleam them with smiles and laughter, put tears in their eyes or even send them to rage and make them act out of character.

Most of every video or audio advertisement on TV, Radio or the Internet that you see or hear uses Music as its main attraction and attention grabber. Simply by having a relatable song or sound in the background. Whether it’s with a melodie, a suggestive lyric or a catchy jingle, one way or another, they all have some form of Music or sound to which is meant to evoke specific emotions out of you. That specific feeling that you get when you hear it will pull you in to the advertisement’s intended message, products or services.

All movies have scored soundtracks, full of songs and sounds that which is used to evoke the same emotional reactions out of you also, but in a broad and more defined manner. For the simple fact that each Song or Sound has to reflect a specific scene throughout the whole movie, from beginning to end sound plays a vital part in the viewer(s) perceptions as they watch and relate to the characters excitements, fear, pain, joy and etc…, on the big screen.

Since Music first hit the Airwaves on personal devices, from; Radio, to Record Players, 8 Tracks, Cassette Tapes, CDs, iPods and etc…, The affect that it has had on People’s emotions in their solitude is innumerable, but in each specific Era you can generally tell Music’s affect on its Epoch by the way that the People operated during those Time Periods – simply by listening to the Music that the Era produced and distributed on the Mass Media, all the way up to today; with the wild party style of Music and the street style of Music that has actually caused an up roar in the way of Life of the Baby Boomers of the past, to where they’ve even started petitions to ban certain styles of Rap and Rock&Roll Music, all due to the severe influence that the Music has on its younger audience.

Most of the kids and even some adults that listens to Music from the Mass Media outlets, may not realize that it is mostly a form of entertainment and someone else’s acute perspective at best, that process requires a more mature intellect. Therefore the government subsequently made the Artists use Parental Advisory Stickers on their Music prior to distribution. We can say the same thing for certain books, movies and video games, but that’s another subject.

Me personally, I can tell what type of individual that you are at least 90% of the time; by the type Music that you listen to on the daily basis, notice I said type, not Genre of Music, because all Genre’s of Music has its good or bad influences on its recipients. By me being an Artist, I know the impulses and affects that my personal Music has on People’s mindset, which will eventually influence their everyday thinking process. So, if I hear that you’re listening to Contemporary Music like R&B or old school Hip Hop all day, I will take it that you are a laid back type of guy or girl. On the other hand, if you listen to more Pop Music like Crunk Rap, Gangster Rap and EDM all day, I will assume that you are in club a lot. That’s all good and perfectly fine; there’s nothing wrong with that, unless you’re not taking care of your personal priorities in the process. Which that in its own right – is more of a personal problem that has nothing to do with this subject or the Music itself lol. With that being said, Music can be a controller of a person’s mindset with little or no effort at all.

To better prove this theory, in the early 1990’s there was a confidential meeting(s) that took place in a disclosed location by some un-named entities and personnel in the Music Industry. Their mission was to integrate all of the more crime influenced “Gangster Rap” Music into Hip Hop, then put it on the forefront so that the only Music that would be heard Nationally through the Urban airwaves by the masses; was the killing, selling of drugs, abusing drugs & alcohol, going to jail, frivolous spending and degrading women; minority women to be more specific.

By doing this they were able to control the mindsets of the Urban sector through suggestive lyrics and images. All the while making loads of money, not only through record sales, but by housing the very listeners of that style of Music in their own private built prisons and detention facilities, buildings that they invested in or constructed themselves with intent of targeting black males, Latinos and basically anybody in the lower class that is uneducated enough to believe that it’s not mostly entertainment. That someone can really – legally get on the radio and sing about committing illegal activities and not get arrested for implicating themselves of a real life crime that has taken place but yet unsolved by police officers.

It takes education and maturity to listen to a sugestive lyric, process it, take the good, throw out the bad and remain who you are, in your own path. Because it’s obviously not just black males in these private prison facilities. I say all this to prove how powerful of a tool Music is amongst us as People, not just as a specific race.

The reason why I even bothered to touch on this topic and communicate it with you; is because we believe in Peace and how important it is to have it on a day to day basis as a Human Being. Not just as a Black, White, Latino, Asian or Arab man or woman.

I believe that, since Peace is something that we all thrive to rest in when we die, why can’t we thrive to Live in it, right now, in this very moment. We also believe that certain types of Music controls and prevent a vast majority of our society from Living in that Peace on a day to day basis, therefore I just really wanted to educate and hopefully open up a few minds that maybe aren’t aware of how the very Music that they are listening to is affecting their everyday Living and perspectives. The way that you see and perceive things may partly be suggestive to what you’re hearing on the radio all day long. The way that we are in our own everyday Lives affects Society as a whole, period.

At LIP, by us being a strictly Peace orientated Association…. we want to encourage our subscribed readers and you, yes YOU, to try looking into to some more Positive Music to listen to and digest throughout the day. We will suggest anything Contemporary in every Genre, specifically early Hip Hop, R&B, Gospel, Soul, Classical and Country, those Genres will help place your mind in Peaceful State throughout the day. Once you start seeing some changes in your Life, please share your experience and encourage others that have a well needed change of Music in their Lives as well… Thank You! Please, Live in Peace.

“The Relationship of Music, Emotions and Reactions” | Written By Marvel Saffold & Randy Pipman
Artwork by Pipvisions.com