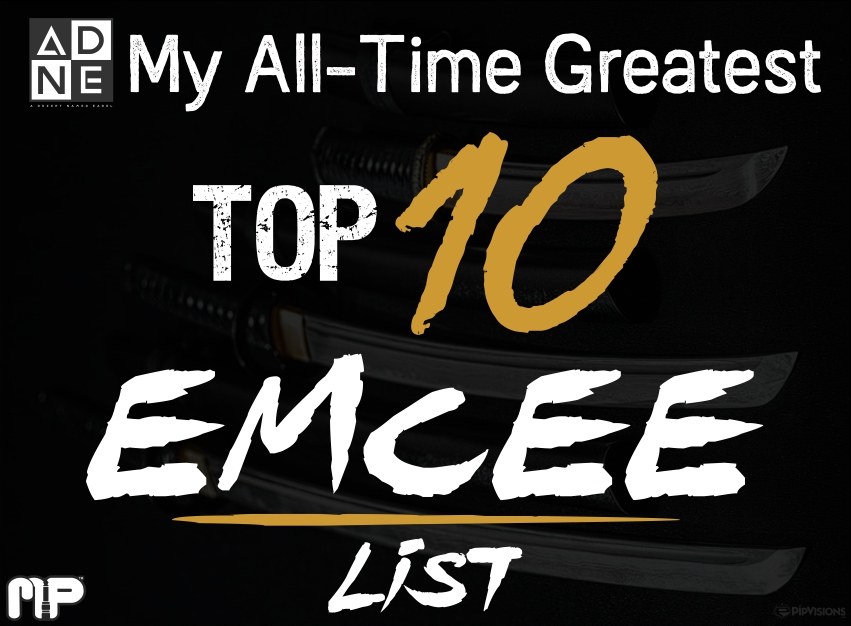 Everyone has a Top Ten MC list, but these days only a few have a Top Ten All-Time Greatest. Hip Hop has had a numerous amount of Legendary Kings to bless and up holds the Mic as MC , but it is only a selected and highly decisive few that has made mine’s, so let’s start this list off.

Let’s kick the list off with Da Ranjahz at Number 10; Da Ranjahz is a rap duo consisting of Haph (a.k.a. Haph Dead) and Wais. The two hail from Brooklyn, New York City. They now go by the name Tha Deuce. During the mid-’90’s, Da Ranjahz were affiliated with a collective known as Team Roc, a group of rappers associated with Roc-A-Fella Records. At the time, this included Jay-Z, Sauce Money, Memphis Bleek and Jaz-O. Da Ranjahz made their first official appearance on “If I Should Die” a track on Jay-Z‘s 1998 release, “Hard Knock Life, vol. 2”. The Da Ranjahz rank as number 10 on my list due to their wit and metaphorical persistence that is certainly unparalleled and rivaled classics tracks such as Bullet Proof feat Jay-Z sets my prime example!

9th on my list is Heltah Skeltah, man when I say these guys are an awesome hip-hop duo believe so!, consisting of members Rock (Jahmal Bush) and Ruck (Sean Price). The two are members of New York supergroup Boot Camp Clik, along with Buckshot, Smif-N-Wessun and O.G.C.. The name “Heltah Skeltah” is a reference and homage to The Beatles, specifically their song “Helter Skelter” from the album The Beatles. Heltah Skeltah debuted on Smif-N-Wessun album “Dah Shinin” in 1995, appearing on the tracks “Wontime”, “Cession at da Doghillee” and “Let’s Git It On”. Later in 1995, they grouped up with fellow Boot Camp members O.G.C. to form The Fab 5 (another nod to The Beatles), and released a surprise hit single, “Leflaur Leflah Eshkoshka”. Out of The Fab 5 members. Heltah Skeltah makes number 9 on my top ten all time hip hop list due to their eccentric an ecstatic electrifying forms of synchronicity and jaw dropping riddles.

8th on my list would defiantly has to be AZ, longtime and frequent rhyme partner of Nas, and also a member of hip-hop group The Firm alongside Nas, Foxy Brown, Cormega and Nature. 1st appearing on Nas 1994 album “Illmatic” on the song “Life’s a Bitch”, as well as featuring vocals on the opening track “The Genesis”. AZ signed with EMI, and soon released his debut album “Do Or Die” in 1995 to critical acclaim, but meager commercial success. The album’s lead single, “Sugar Hill”, became AZ‘s only major commercial success as a solo artist, reaching #25 on the Billboard Hot 100 chart, and achieving Gold status. In a countdown of the 10 most unappreciated rappers most underrated rappers of all time, the editors of About.com listed AZ as #1 on the list. AZ ranks number 8 on my list due to his balance and consistent style of balancing the modern urban lively hood along with the metaphysical aspects of life as well as his lyricism.

7th on my list is Tupac, as a child I didn’t pay much attention to Tupac as most hip-hop fans did, yet when I grew up I was trying to decipher the controversy that was surrounding the critically acclaim Artist. Then it all hit me bout time I reached 14 going on to 15 when my mother reintroduced me to “Me Against The World” and the Tupac’s “Greatest Hits” album, reintroducing me to the conceptual and painful concepts that I have been missing out on for seven years as well as the relative pains that streamed deep within the soul of such artist. For example tracks like “Rear-view”, “Death around the Corner”, “Brenda Had a Baby” and “Broken Wings”. Tupac makes number 7 on my list due to the raw innate emotions that he executes in the majority of his work.

6th on my list is Jay-Z, I can’t begin to explain the type of emotions and vibrations that i received when i 1st tuned into “Reasonable Doubt”, What i got off of Jay-Z was that he was a subconscious and conceptual warping artist. Jay-Z‘s “Reasonable Doubt” album was like a classic Mafia cinema where you had your main character explaining his daily life story as well at the dimensions and demons that dwells with in his mind due to his lively hood, I mean “Reasonable Doubt”!, Jay-Z ranks number 6 on my list due to his way of giving you a flawless reflection of what he’s trying to display to his listeners.

5th on my list is Raekwon The Chef, member of the legendary Wu Tang Clan. Rae Rae Rae, Oh my god the intensity this brother introduced to hip hop with his 1995 debut album “Only Built 4 Cuban Linx”, “Incarcerated Scarface” , “Crimonolgy”, “Glaciers of Ice” were all flawless classics in my book. From the conceptual image, capturing visuals and tongue tying word play. Reakwon ranks as number 5 in my list due to his titanic word play and intense lyrics.

4th on my list is Gza The Black Horse, another member of the legendary Wu Tang Clan. It wasn’t till I was in the 12th grade when I started to pay attention to Gza when my social studies teacher introduced me to the classic 1995 “Liquid Swords” album, This album gave me goosebumps and chills threw out the whole album, a strong mixture of spiritual and street, “Liquid Swords” introduced me to the horrifying reality of the urban life style that a majority of us only know. Yet the beauty of this album is that it converts you to the bigger picture of the message towards the end with the classic track “B.I.B.L.E”. Gza ranks as number 4 on my list due to his dark yet light approach on his classic and inspirational album “Liquid Swords”.

3rd on my list is the dynamic Bronx duo Camp-Lo, consists of rappers Sonny Cheeba (Salahadeen Wilds) and Geechi Suede (Saladine Wallace). The duo is perhaps best known for their 1997 hit, “Luchini AKA This Is It”. Camp Lo made their first appearance in 1996 on “The Great White Hype” soundtrack, with their single, “Coolie High”. The smooth party song was a minor hit, peaking at #25 on the Billboard Hot Rap Singles chart. Their first major exposure came with the release of their second single, the upbeat, horn driven “Luchini”, otherwise known as “This Is It”. The song became a crossover hit in 1997, breaking into the Top 50 on the Billboard Hot 100, and reaching the top 5 on the Hot Rap Singles chart. The track peaked at #74 in the UK Singles Chart in August 1997. The duo released their debut album “Uptown Saturday Night” in January 1997. The effort was widely acclaimed, praised for its accessible content and smooth, funk and jazz inspired production. Camp-Lo simply blew my mind away with their smooth yet razor cutting jazzy lyrics.

Camp-Lo marks as number three on my list due to their eccentric and jazzy style from their lyrics to their apparel and their persona.

2nd on my list is Black Thought lead artist of the legendary Roots. I know this is sad but I 1st listened to “Illadelph Halflife” not too long ago like about 2009 I was 19. Even then I was a late bloomer when it came to listening to this album Black Thought most definitely ranks in My Top Ten Greatest MC’s of All-Time list. I mean it’s not every day you run across MC’s that are Esoterically and Urbanely incline taking you to a mind warping journey threw space in time, I mean I feel as if I explained enough on this note if you’re a true hip-hop fan, let alone a fan of mines you must listen to “Illadelph Halflife”! Black Thought ranks number 2 on My Top Ten Greatest MC’s of All-Time list because of his incredible inclination of applying esoteric concepts along with the everyday aspects of the different classes of society especially the Urban.

Last but definitely not least on My Top Ten Greatest MC’s of All-Time list is none other than Queens native MC Nas, it wasn’t till I was 13 years old where I grew a deep appreciation and love for the art form of Nas. I was 1st introduced to Nas in 1997 during the “It Written” album. I remember being moved by the words of “If I Ruled The World” featuring Fugees member Lauryn Hill. The feeling was like no other, such feeling installed hope and remote vision within my young mind, but it wasn’t till 2003 when I started to start taking a liking to the conscious MC when I came across the “Nastradamus” album where I came across the track “Life We Chose”. Around the time I was going through a difficult time in my life as a teenager and “Life We Chose” just happened to be one of those tracks that brought clarity and commiseration to my life at the moment and reminded me of why I feel in love with this artist work of art in the first place. Since then I went as far as studding this artist and supporting every move as well as realizing the parallel reflections and history that we both share. Nas ranks number 1 on My Top Ten Greatest MC’s of All-Time list because in my perspective he complements all 9 of my favorite MC’s as well as myself and path in a since of a matter.

I hope you all enjoyed My Top Ten Greatest MC’s of All-Time, feel free to share opinions and thoughts I wanna hear what you guys have to think let’s build, till then peace, love and light one.

Nothing is Something. By Pharaoh Pip
The Clue’s Blue
Advertisement